Tasks Details
hard
1. DwarfsRafting
Find out how many dwarfs can fit on a raft such that it's balanced when crossing a river.
Task Score
100%
Correctness
100%
Performance
Not assessed

A company of dwarfs is travelling across the New Zealand. On reaching the Clutha River the dwarfs need to get across, but recent storms have washed away the bridge. Luckily, a small ferry, in the form of a square raft, is operating.

The raft is square and has N rows of seats, numbered from 1 to N. Each row contains N seats, labeled with consecutive letters (A, B, C, etc.). Each seat is identified by a string composed of its row number followed by its column number; for example, "9C" denotes the third seat in the 9th row.

The raft has already been loaded with barrels in some seat positions, and other seats are already occupied by dwarfs. Our company of dwarfs may only take the remaining unoccupied seats. The ferryman wants to accommodate as many dwarfs as possible, but the raft needs to be stable when making the crossing. That is, the following conditions must be satisfied:

You do not have to worry about balancing the barrels; you can assume that their weights are negligible.

For example, a raft of size N = 4 is shown in the following illustration: 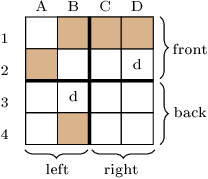 Barrels are marked as brown squares, and seats that are already occupied by dwarfs are labeled d.

In this example, the ferryman can accommodate at most six more dwarfs, as indicated by the green squares in the following diagram: 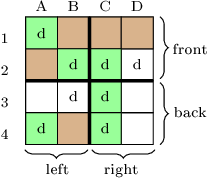 that, given the size of the raft N and two strings S, T that describes the positions of barrels and occupied seats, respectively, returns the maximum number of dwarfs that can fit on the raft. If it is not possible to balance the raft with dwarfs, your function should return -1.

In your solution, focus on correctness. The performance of your solution will not be the focus of the assessment.