Tasks Details
hard
1. SlalomSkiing
Given a sequence, find the longest subsequence that can be decomposed into at most three monotonic parts.
Task Score
100%
Correctness
100%
Performance
100%

You are a skier participating in a giant slalom. The slalom track is located on a ski slope, goes downhill and is fenced by barriers on both sides. The barriers are perpendicular to the starting line located at the top of the slope. There are N slalom gates on the track. Each gate is placed at a distinct distance from the starting line and from the barrier on the right-hand side (looking downhill).

You start from any place on the starting line, ski down the track passing as many gates as possible, and finish the slalom at the bottom of the slope. Passing a gate means skiing through the position of the gate.

Unfortunately, changing direction (left to right or vice versa) is exhausting, so you have decided to change direction at most two times during your ride. Because of this, you have allowed yourself to miss some of the gates on the way down the slope. You would like to know the maximum number of gates that you can pass with at most two changes of direction.

For example, consider array A such that: 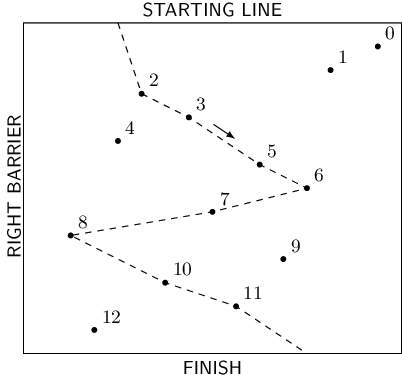 that, given an array A consisting of N integers, describing the positions of the gates on the track, returns the maximum number of gates that you can pass during one ski run.

For example, given the above data, the function should return 8, as explained above.

For the following array A consisting of N = 2 elements:

the function should return 2.